Layers of the week: Germany’s No. 1 yellow pages Gelbe Seiten and conquer world cities with the ConquAR game layer

Because of all the fuss of last week’s NEXT event we saved the layer of last week for this week’s post. Marc Rene Gardeya from Hoppala shared with us what it’s like to work with a big brand for the Gelbe Seiten layer, Germany’s number one Yellow Pages. Next to that, this week’s recommendation is the ConquAR layer, an Augmented Reality strategy game through which you can conquer world cities, made by C2K.

Gelbe Seiten, Germany’s number one yellow pages, launched a layer with its service in Augmented Reality. The layer was developed by Hoppala from Germany, and integrates all data of Germany’s yellow pages service. We talked to Marc René Gardeya, founder and CEO of Hoppala, about the Gelbe Seiten layer and his experience with working with a big brand and a huge thirdparty data source.


Can you tell us something about the requirements of Gelbe Seiten?
Marc: “Gelbe Seiten ordered a complete layer package: setup and design, linking the layer to the existing Gelbe Seiten database and creating additional mobile web pages for every Gelbe Seiten item to show detailed information like opening times, ratings or foto’s.”

What were the main challenges when developing the layer?
Marc: “There were basically two major challenges: one was to design the layer as close to the Gelbe Seiten corporate identity as possible. And secondly we needed to hook up the Gelbe Seiten layer with the existing Gelbe Seiten database, which is a huge system. Together we pulled it off, it was great to work for Gelbe Seiten Deutschland!”

The layer of this week is ‘ConquAR’, a Risk-inspired strategy game in Layar’s Augmented Reality created by C2K. The layer makes your surroundings part of the game: The world is your game board, virtually to conquer. For the individual gameplay, you conquer cities instead of whole countries as in the original game of Risk. As for now, ConquAR has about 160 active players. On the ConquAR website you can keep track of all cities that are conquered and the scores of the conquering teams. We talked to Fred van Rijswijk and Pascal van Gemert from C2K about their game.

What inspired you to create this AR strategy game?
Pascal: “We wanted to relight the fire of old fashion board games by combining their gameplay with augmented reality.  We started to think about different board games and landed on the strategic game of Risk. We figured that the original goal of Risk, conquering countries and continents, would be too big of a goal for individual play. So we used cities instead of countries, which works great.”

How can users conquer a city? And which cities can or should be conquered?
Pascal: “When you’re in the layer, you can see the cities around you and get some information about them. If you want to conquer and defend cities, you have to create an account first. Then you will be placed in a team (red, blue, black, yellow or green). Then and are able to attack cities of the other teams by clicking on the army icons, or strengthen cities with the color of your own team. Right now we already have over 2500 cities that you can conquer in the following countries: The Netherlands, United Kingdom, United States, France, Sweden, Japan and South Korea.”
Fred: “We are still adding countries to our database and are planning to add other types of locations like airports, sightseeing spots and other interesting places.”

What about the gameplay of the layer?
Fred: “The game is already turning out to be addictive fun for some players and we are noticing that big cities are very popular places to conquer. The only thing we’re struggling with is the active period of the game. Currently, when you’ve lost or fortified all your armies the game ends, and you have to wait until the next reinforcement moment to be able to play again.”
Pascal: “We will add new features to expand the game play within the next month or two, including:


Other suggestions to enhance the gameplay are very welcome!”

A good visit to London: Facebook Event and Meffys 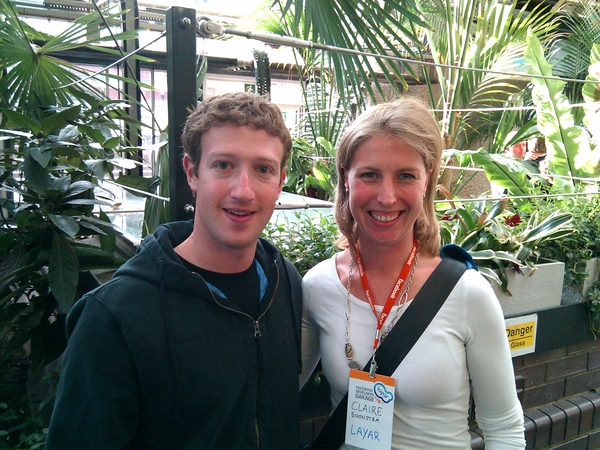 Last Monday June 21st I celebrated the official start of the summer with a visit to London, to attend the Facebook Developer Garage London (FDGL; #fdgl on Twitter) and the Meffys Award dinner and gala.

The FDGL was a great event, organized by the local London Facebook developer community, together with Christian Hernandez (@christianhern) from the Facebook EMEA and Developer team. Facebook is now focusing much more on areas outside of the US, so they decided to send an executive team over to attend this event including Joanna Shields, Mike Vernal, Ethan Beard and Mark Zuckerberg himself! The atmosphere was great and I got to meet many great companies and developers - and managed to talk with “Zuck” for a while about Layar. He was impressed by what we achieved in only one year!

We are thinking about how we can integrate Facebook and Layar in the best possible way - so that Layar users can share their activity on Facebook. Mark Zuckerberg indicated they are finishing designing their geo-location application and hope to offer it soon. Which is of course possibly also very exciting for Layar. Tweets about the event can be found here.

After the Facebook event I went to the Meffys Award dinner. The Meffys are the ‘Oscars’ of the mobile entertainment industry - awarded by the Mobile Entertainment Forum (MEF). This was a gala dinner - so unlike most geeky & startup events, people were wearing suits, tuxedo’s and cocktail dresses, and the dinner was held in a ballroom with chandeliers. Nice!

During the ceremony, 18 Meffys were awarded in categories such as ‘Best Music Service’, ‘Best Game’ and ‘Best Ad Campaign’. And guess what: Layar won the Meffy for ‘Technology Innovation’! This is a fantastic reward for Layar - showing that we have passed the ‘promising startup’ stage to become a mature business.

The Meffys were by the way not the only award we received last week. Marc Rene Gardeya from Hoppala received the Autovision Innovation Award on behalf of Layar on June 16th. More information can be found on his blog.

Thanks all for a great event and great prizes,